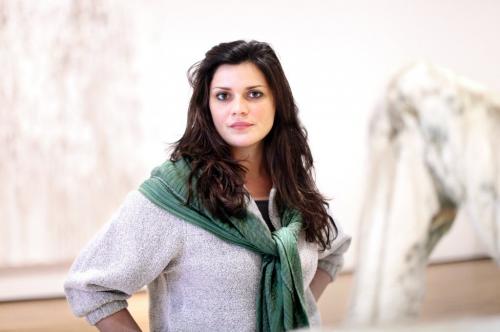 Diana Al-Hadid is known for a practice that spans media and scale, and examines the historical frameworks and perspectives that shape our material and cultural assumptions. Al- Hadid’s sculptures, panel works, and works on paper are built up with layers of material and history. Her rich, formal allusions cross cultures and disciplines, drawing inspiration, not only from the history of distant civilizations, but also from histories of the materials themselves.

Diana Al-Hadid’s practice borrows from a variety of sources ranging from Old Master paintings to the innovative works of the Islamic Golden Age. Described by Al-Hadid as “somewhere between fresco and tapestry,” the artist’s three-dimensional wall panels emphasize her skilled gestural brushwork. Holes and gaps form not from puncture, but through controlled dripping, methodically reinforced in a delicate interweaving of mass and void. Their abstractions variously recall both human creations and those of the natural world: the swirling drapery of fine fabrics, or the slow drip of cave matter. These forms have been realized as hanging objects, architectural interventions, and most recently as outdoor installations.

She was born in Aleppo, Syria in 1981 and currently lives and works in Brooklyn, New York. She received a BFA in Sculpture and a BA in Art History from Kent State University in 2003, and an MFA in Sculpture from Virginia Commonwealth University in 2005, and attended the Skowhegan School of Painting and Sculpture in 2007. She has been the recipient of a Joan Mitchell Grant, a Louis Comfort Tiffany Grant, a New York Foundation for the Arts Grant, and a Pollock-Krasner Grant. She is also a USA Rockefeller Fellow. Her mosaic murals for NYC’s Penn Station were among 100 finalists for CODAawards, an international competition honoring public commissions that integrate interior, architectural, or public spaces. In 2020, she received The Academy of Arts and Letters Art Award.