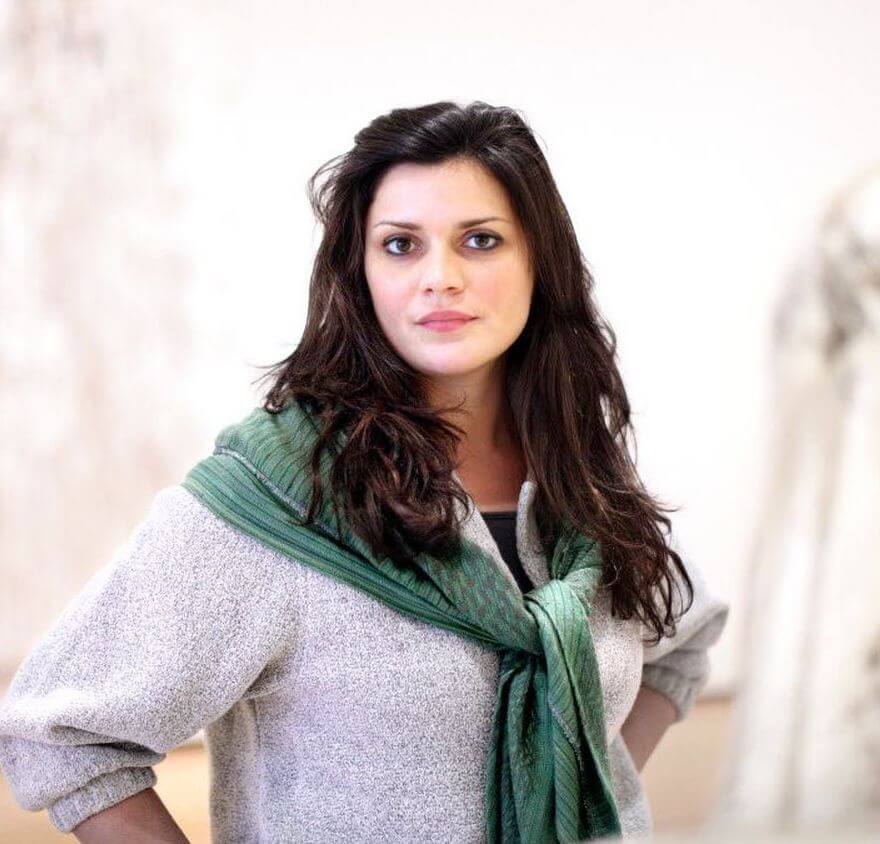 An Exchange Between Clouds and Rocks

Galerie Isa is pleased to present An Exchange Between Clouds and Rocks, an exhibition featuring new works by Brooklyn-based artist Diana Al-Hadid. The eight works on debut in the exhibition were painted at a time when the world stopped, when we were suspended in what felt like a non-linear timeline – waiting as we began a long process to redefine and realign the self. This body of work at Galerie Isa is, amongst many things, an acknowledgement of that stillness, encased in a time present, while also rooted in a time past. Al-Hadid’s inspirations follow an imaginary journey beginning at the site of her most recent exhibition in Belgium, stopping in her birth country of Syria, and ending finally in 17th century India.

As we move through Al-Hadid’s works, we are drawn by the materiality of her creations. She uses common day sculpture and construction materials such as polymer gypsum, fibreglass, steel, plaster, pigment and metal leaf to build paintings from the ground up. Al-Hadid describes her work as a process “somewhere between fresco and tapestry,” both mediums that are built layer upon layer. To begin with, she paints the image from behind the picture plane using pigmented gypsum. As Al-Hadid says, “In a sense, the image comes first and the ‘canvas,’ or connective tissue, follows. At this stage, I am consumed with the structure of the image, how it is all held together. The openings in the surface are not removed but rather areas that never were painted in the first place.”

Al-Hadid’s works are narrative pieces, which are revealed as the viewer engages with the work over time. Like a forest of illusions the works draw the viewer in, teasing them to submit to the vagaries of the artist’s imagination, her focused knowledge of histories both personal as well as global, forces the viewer to excavate the deepest recesses of memory as they explore the work. Al-Hadid’s keen interest in narrative, objects and historical motifs appear ambiguous and compel the viewer to consider personal and global connections. And it is this process that we discover for ourselves a past that is constantly present.

Several of Al-Hadid’s works in the show build on her exploration of the work of 15th century painter Hans Memling. The complexities of Memling’s works dovetail with Al-Hadid’s own astounding attention to detail. As seen in A Still Life, in Contrast Still, Memling’s seemingly innocuous work, Flowers in a jug (1485) is permeated with complex Western symbolism, all which sit upon an early example of an Armenian rug. This materialized manifestation calls attention to the artist’s personal journey –being of Syrian descent but a citizen of the United States of America.

Al-Hadid returns to her inquiry of legends and tales of women in captivity again in her work titled, An Exchange between Clouds and Rocks. This work takes as its starting point Jan Gossaert’s Danae (1527), a painting of the ancient Greek myth which tells the story of a princess imprisoned in a bronze chamber to prevent a prophecy that foretells the death of the king, and transforms the event into an atmospheric mist.

In other works, such as A Complex Garden, Palace, Harem, inspired by a miniature painting of the Mughal court in its years of decline, is a panoramic view of a garden complex with concubines enjoying a “pleasant but enforced idleness,” as is noted in the collections catalog.

Finally, the exhibition’s largest panel, titled Al Qa’a brings us to the waiting room of a mansion built over Roman architecture in Damascus, Syria. Centered around a courtyard with patterned floors and a fountain hidden in the heart of the labyrinthian historic marketplace, or “souk.” This painting of a room offers the viewer a moment of respite, to be still among the layers of surrounding history. While each of these 8 panels bring with them a host of Christian, Muslim and mythological iconographies, her work stands at opposite ends of these worlds and like the medium of her work, these too stretch across the empty spaces in stillness and in conversation.

Al -Hadid was born in Aleppo, Syria in 1981 and currently lives and works in Brooklyn, New York. She received a BFA in Sculpture and a BA in Art History from Kent State University in 2003, and an MFA in Sculpture from Virginia Commonwealth University in 2005, and attended the Skowhegan School of Painting and Sculpture in 2007. She has been the recipient of a Joan Mitchell Grant, a Louis Comfort Tiffany Grant, a New York Foundation for the Arts Grant, and a Pollock-Krasner Grant. She is also a USA Rockefeller Fellow. Her mosaic murals for NYC’s Penn Station were among 100 finalists for CODAawards, an international competition honoring public commissions that integrate interior, architectural, or public spaces. In 2020, she received The Academy of Arts and Letters Art Award.