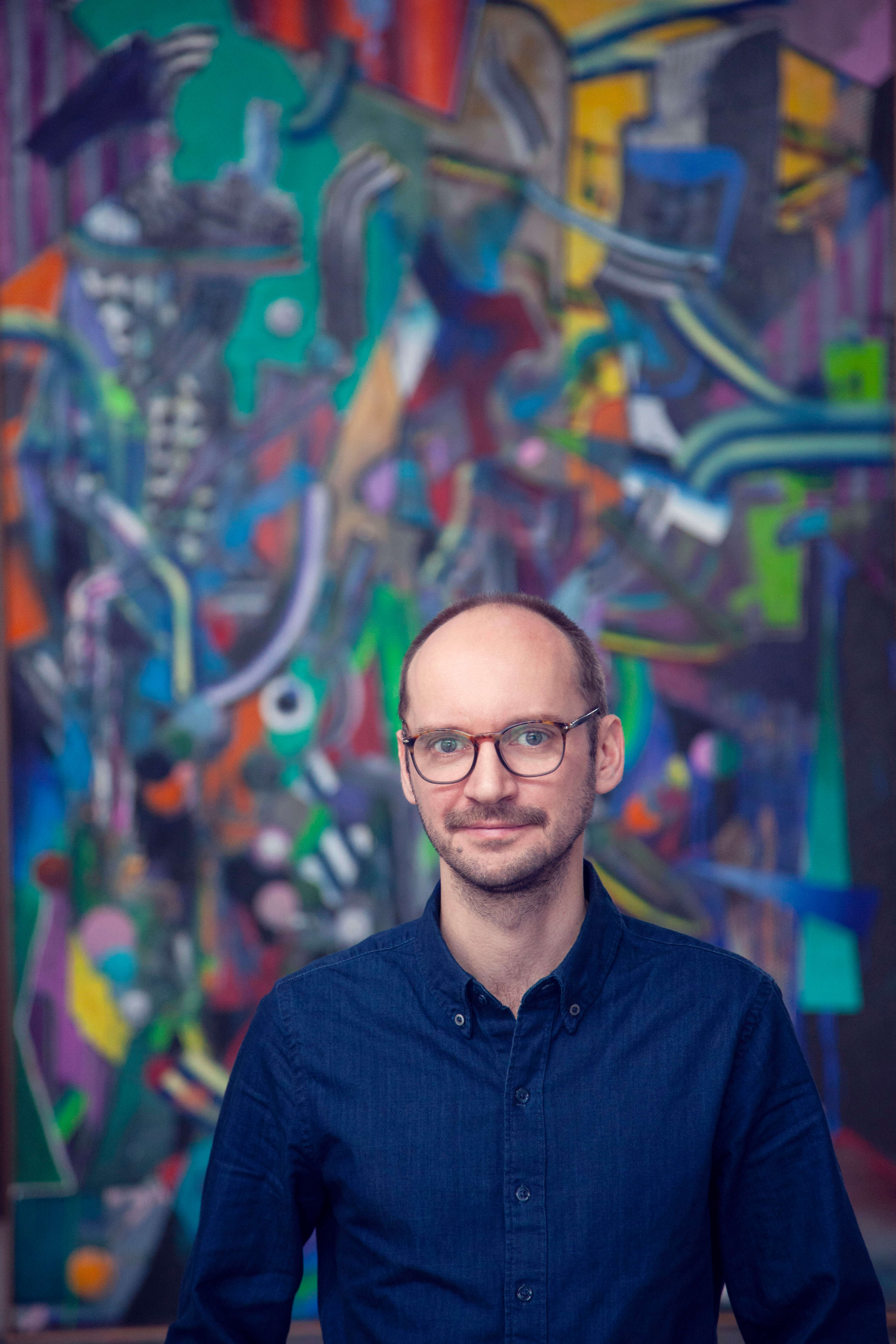 Grounding his practice in the major movements of 20th century art history, the German painter and sculptor, Christian Achenbach (b. 1978 Siegen, Germany) uses the lens of postmodernism as a prism to conjure his arresting landscapes. The artist intelligently repositions and reforms established languages and ideas, reframing them in a fresh, new context. Achenbach’s creative process lends itself to the world of musical composition where the multiplicity of violently clashing colours and shapes emphasises shifts of tonality. This evokes a materiality of sound that reveals Achenbach’s own love of music - a passion shared with the late artist Kandinsky, who once claimed that he saw colours when listening to notes - something we might understand today as a form of synesthesia. It can be argued that the compositions and painterly rhythms of both artists are focused on creating a form of hybrid musical score where pictorial space can be equated with sound. A close engagement with Achenbach’s art historical quotations reveals an intelligent conversation with the movements of Modernism and Postmodernism, in terms of art but also in terms of musical history.

In his earlier works, Achenbach turned to movements such as Fauvism, Dadaism and Cubism for inspiration. We see this in each of his paintings where no central motif can be found and instead, geometric shapes and symbols spiral in and out of each other. Much like the music in which Achenbach finds joy through a variety of genres including electronic, experimental, classical and rock, the expected definite outlines have been removed or become blurry, the array of colours more explosive or staccato, tone replaced at times by the atonal. The artist himself says, “For me it gets most exciting when I mix things together which are the most opposite of each other, like Geometrics and Expressionism. Most aesthetics in pop culture have their roots in art history anyway, you just need a certain understanding to notice them”.

Since 2013, Achenbach’s sculptures have become an integral part of his artistic process. They can be regarded as three-dimensional paintings, challenged by a new materiality and the role of light on form. Known elements have been re-introduced and re appropriated, cut from aluminium and steel and re forged. Such compositions result in geometric objects that demand a physical engagement beyond a purely aesthetic experience. Despite their weighty materiality, the works give the impression of floating objects that have overcome gravity and are even capable of performing a kind of dance. Both sculptures and paintings explore the territory of colour theory, clashing colours are pitted against each other, the line of form is disrupted by varying levels, contours and geometry, thereby inviting a comparison with the kinetic sculptures of the late great Alexander Calder.

“Objects & Scapes” is Achenbach’s latest incarnation of works. Whereas his paintings demonstrate a shift from abstraction towards the more traditional genre of landscape, his new glass and steel sculptures refer to Futurism. They capture the play of light between translucent objects and opaque forms. The artist has moved away from machine-like compositions towards a more poetic language encompassing cosmic patterns that revel in their lightness of being. In these new sculptural works, Achenbach explores the ability of Lalique glass (an established luxury glass brand), to absorb, disperse and transform light and colour. The artist then juxtaposes this brilliant luminosity with the opacity of painted steel.

Although Achenbach engages with Surrealism, Expressionism and Constructivism in his landscape paintings, his artistic vocabulary remains constant and faithful to that which he employed in his earlier works. Instead of studying or approaching specific landscapes, the artist uses an idea merely as a motif or form to germinate further creativity. He constantly challenges and pushes these artistic conceits to their limits. In this process, emphasis is put on how a painting or sculpture comes into being, rather than on what it depicts. In common with his earlier work processes, Achenbach constructs collages by eclectically arranging clichés, art historical quotes and influences. In this he moves towards a more organic language, that can absorb and mutate different elements and styles.

Achenbach’s new series of work exemplifies how paintings and sculptures are thematically and formally intertwined processes. The artist describes the relationship between sculpture and painting as a “natural give and take” - a see saw that balances the realms of the two and three-dimensional but also emphasises difference. Whereas painting is spontaneous, fluid and dynamic, sculpting glass and steel requires a long and thoroughly planned process that involves extreme precision. In contrast to his earlier paintings and sculptures, Achenbach’s latest work reveals a new maturity and confidence - stark contours soften, and strict compositions are allowed to begin to dissolve into vibrant and fluid landscapes, revealing a transition towards more organic colours and motifs. In these new creations we find trees, leaves, rivers, mountains, suns and moons – all depicted in the artist’s unique and highly distinctive vocabulary, that has been honed and pared down to an exquisitely spare but powerfully evocative language.