Visions from Beyond: A Foray into Metaphysics and Materiality

Galerie ISA is delighted to present Visions from Beyond: A Foray into Metaphysics and Materiality. The exhibition brings together new work by three young artists: Daniel Lergon, Dan Rees and Mindy Shapero. Though they share a common interest in the field of abstraction, each artist has his or her own distinct focus. These differences lead them into various investigations and explorations such as the relationship between light and surface, the real and the imagined, and the spiritual and fantastical. The results of these journeys are a series of sensitive and provocative works that reveal what can be felt as well as observed, and shared as well as kept hidden.

German artist Daniel Lergon (Bonn, 1978), has long been fascinated by the dialogue between light and materiality. Since his training at the Universität der Künste (UdK), Berlin, under Professor Lothar Baumgarten, Lergon’s work has consistently reflected his interest in colour and the results of light’s interaction with different surfaces. Lergon fuses a scientific approach with an artist’s understanding for transformative process. Recent research has led him into investigating the beginnings of the Siderian period, 2,500 million years ago, when the so-called: ‘Great Oxidation Event’ occurred (a phenomenon describing the first appearance of oxygen that prompted a shift in the chemical composition of Earth’s oceans and that let the irons and minerals within them rust). This time period also witnessed one of the largest glaciations: the Huronian, which, like the element iron, was to prove hugely transformative in terms of the Earth’s and human development.

For Lergon, this shift between ice and iron serves as a metaphor for the opposition of white retroreflective and water on iron paintings, or in other terms, for the duality of light and matter. Colour can be generated by painting with various lacquers and varnishes on retro-reflective fabric that react on contact, and also by the effect of water on materials such as iron. Though Lergon used to work with pigments earlier in his practice, he now restricts himself to transparent media. This means that the nature of the various materials he works with and the process itself are implicated and instrumental to the result. Unlike most artists who apply colour onto a neutral surface, Lergon’s surfaces are dynamic and volatile, as are his mediums. This inherent variability means the resulting works are always experimental.They are also paradoxical: in appearance Lergon’s paintings are seemingly casually gestural, yet their ‘easiness’ belies the complexities of their construction Berlin-based artist, Dan Rees (Swansea, 1982) does not reduce his practice to a single medium, rather he prefers to create what he describes as a kind of conversation or collaboration. This involves Rees incorporating sculpture and painting into a ‘modus operandi’ that treats the process of reproduction and recognition as a medium in itself. Rees’ work is littered with references to conceptual art practice yet, he refuses to commit to a narrow, elitist approach, preferring instead to borrow from pop culture and to use materials and processes that are riven with connections to childhood craft and every- day life such as plasticine, plaster – even cake. A gentle humour runs through Rees’ work, this is evident in his irreverent references to famous conceptual works, but though gently mocking and witty, Rees is cleverly addressing the situation common to all young artists living and working today: the question of what to do with their inheritance? The 20th Century saw art turned on its head and for any contemporary young painter or sculptor it is impossible to ignore the impact of conceptual art and cultural theory on their practice and the wider context. Rees knows that today’s artist and viewer are adept at finding art historical references and at re-quoting the great and the clichéd, so he makes this a virtue by exercising the freedom to explore the terrain between what is received and how he feels about it, and between belief and acceptance, thoughts and dreams and the inanimate and the spirit.

The Los Angeles-based artist, Mindy Shapero (Louisville, Kentucky 1974), is adept at creating a convincing alternate universe within which her drawings and sculptures take on totemic properties. Though she works with objects that necessarily engage with formalist concerns, her practice has always been more concerned with narrative than with making ‘things’. This notwithstanding, just as Lergon’s works are paradoxical in their contradiction between a labour intensive process and ‘easy’ appearance so Shapero’s objects are meticulously rendered and highly finished and thus there is a tension between their nature and purpose. Tension though is something that underpins Shapero’s work and the artist and her practice seem to thrive on it. She draws from both art historical tradition and from outsider practices and spiritual experiences. Shamanism and symbolism allow the artist to transcend the physical plane yet she retains a connection to modernist notions through formalism. Lest we should become too concerned with the literal, Shapero disrupts our reading of her work with her deliberately long and convoluted titles; jumbles of words that reach out beyond reality for the mystical and supernatural. Again she teases us, for her melange of the familiar with the alien, the exquisite with crafty, low-tech fabric; results in a surreal experience. This is definitely out of the ordinary and hovers invitingly at the borders of fantasy.

The quest for finding a way of working that is situated at an intersection between the physical and the spiritual is a unifying factor between all three artists in this exhibition. They share a desire to explore a vision that is beyond reality. This leads them in diverse directions and manifests itself in distinctly disparate working methods, yet the need to question and disrupt; to find the rub which challenges expectations is gratifyingly evident in all of their practices and forays into metaphysics and materiality. 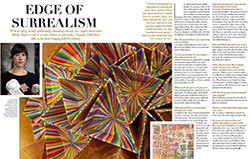 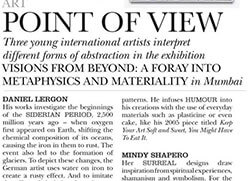 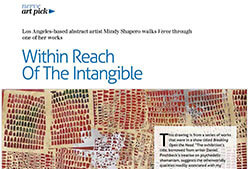 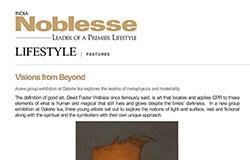 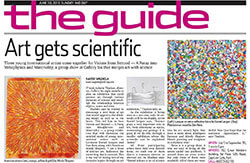 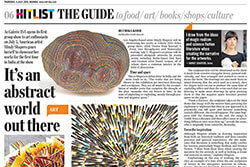 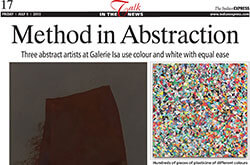 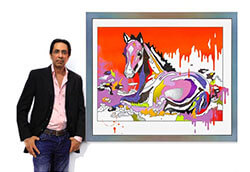 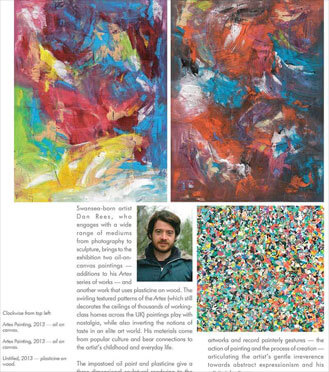