The selected artists for the upcoming exhibition differ in how they conceptualize and visualize their practice in relation to their material, but what they all have in common is an urge to recognize, format and deform patterns – be it patterns of abstraction, of thought or of matter. They make visible what is often hidden, they encourage their mediums and forms to unfold their own logic in order to find a connection, a solution and compose it on to a surface.

By placing this show at the beginning of the Indian monsoon season, their artistic practice of abstract-pattern recognition and destruction builds a structural, poetic and aesthetic connection to the natural phenomenon of the Indian monsoon: current patterns that coat and move over the Indian subcontinent, South Asia and Indochina. Colossal winds gather water clouds from one place in order to unload it to another, simultaneously delivering rain and hence joy and sorrow to nature and to human beings.

Whether it is joy or sorrow, the monsoon season is certainly the time of deep human awareness – as are the artworks of these sensitive artistic minds:
Olafur Eliasson, Gregor Hildebrandt, Nadia Kaabi-Linke, Dan Rees, Anselm Reyle and Oliver Roura

Olafur Eliasson (b.1967 Copenhagen,Denmark) is a Danish-Icelandic artist known for sculptures and large-scale installation art employing elemental materials such as light, water, and air temperature to enhance the viewer’s experience. In 1995 he established Studio Olafur Eliasson in Berlin, a laboratory for spatial research. Eliasson represented Denmark at the 50th Venice Biennale in 2003 and later that year installed The Weather Project in the Turbine Hall of Tate Modern, London.

Eliasson has engaged in a number of projects in public space, including the intervention Green river, carried out in various cities between 1998 and 2001; the Serpentine Gallery Pavilion 2007, London, a temporary pavilion designed with the Norwegian architect Kjetil Thorsen; and The New York City Waterfalls, commissioned by Public Art Fund in 2008.

Gregor Hildebrandt (b.1974 Bad Homburg,Germany) makes great use of prerecorded cassette tapes as material in his pictures and installations. The tapes are applied directly onto canvases and photographic prints and in room-sized installations. Although Hildebrandt’s work makes formal reference to Minimalism, the addition of a great number of subjective and autobiographical citations actually deliberately repudiates this strategy.

For Hildebrandt, the cassette tape as artistic medium, especially in its original function of storage medium, fulfils an important function: it enables the artist to add a further “invisible” dimension to his pictures. Playing with perception in this way is a major characteristic of his work; the picture is completed in the head of the viewer. Nadia Kaabi-Linke was born in 1978 in Tunis to a Ukrainian mother and Tunisian father. She studied at the University of Fine Arts in Tunis (1999) before receiving a PhD from the Sorbonne University in Paris (2008).

Kaabi-Linke takes inspiration from the forgotten or misused urban spaces around her. Her installations, objects and pictorial works are embedded in urban contexts, intertwined with memory and geographically and politically constructed identities. In 2009 Nadia was awarded the Jury Prize by the Alexandria Biennale. In 2011, she was the recipient of the Abraaj Capital Art Prize and was part of two group shows: The Future of Promise (Edge of Arabia, Venice Biennale, Italy) and Based in Berlin (KunstWerke-Berlin, KW Institute for Contemporary Art, Berlin).

Dan Rees (b.1982 Swansea, Wales ) is a multi-disciplinary artist whose work spans a variety of different mediums. He works as a photographer, in performance through video, as a sound artist and as a painter. Rees engages in both process-driven and concept-based approaches to art making. His varied output is laced with art historical and pop cultural references which make his style complex and challenging. Rees’ work is littered with references to conceptual art practice yet, he refuses to commit to a narrow, elitist approach, preferring instead to borrow from pop culture and to use materials and processes that are riven with connections to childhood craft & every day life.

Anselm Reyle (b.1970 Tübingen, Germany) references iconic abstractionists ranging from Kenneth Noland to Otto Freundlich. Characteristic of his approach is the use of found objects, which have been distanced from their original function, alienated visually and put into a new context. Using particular materials such as Mylar of shop windows, acrylic pastes, car lacquers or LED-lights, Reyle observingly reflects not only upon the prevailing codes of taste but also the sometimes utopian ideals of Modern abstraction. Reyle’s critique of painting extends to his exploration of the constantly shifting criteria required for a work to be considered complete. He is one of few contemporary German painters who started his career examining the lessons of abstraction and their place in contemporary painting at a moment when figurative painting had gained critical momentum.

Oliver Roura (b.1978 Barcelona,Spain) received a fine art Diploma from the Massana School of Art in Barcelona in 2008. He has won multiple awards including the XIV Young painting Award of La Caixa Penedès and Anquin’s Gallery. His works have been collected by the Chamber of Barcelona Urban Property and Pinnae Foundation. Recently he has shown his work in the Setba Foundation and is taking part of the “Art i Futur” project in Barcelona. A poet of geometry and colour, Roura primarily paints geometric and fractal abstractions on canvas and his works are enlivened by constant technical experimentations that have deep inspiration in advanced microscopy. 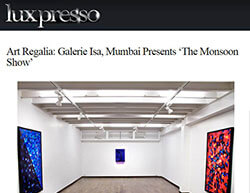 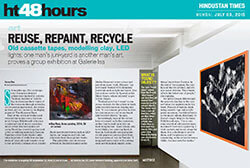