Michaela Yearwood-Dan Don’t Slip Away, 2022 Oil, ink and pastel on canvas 170 x 120 cm Courtesy of the artist and Tiwani Contemporary 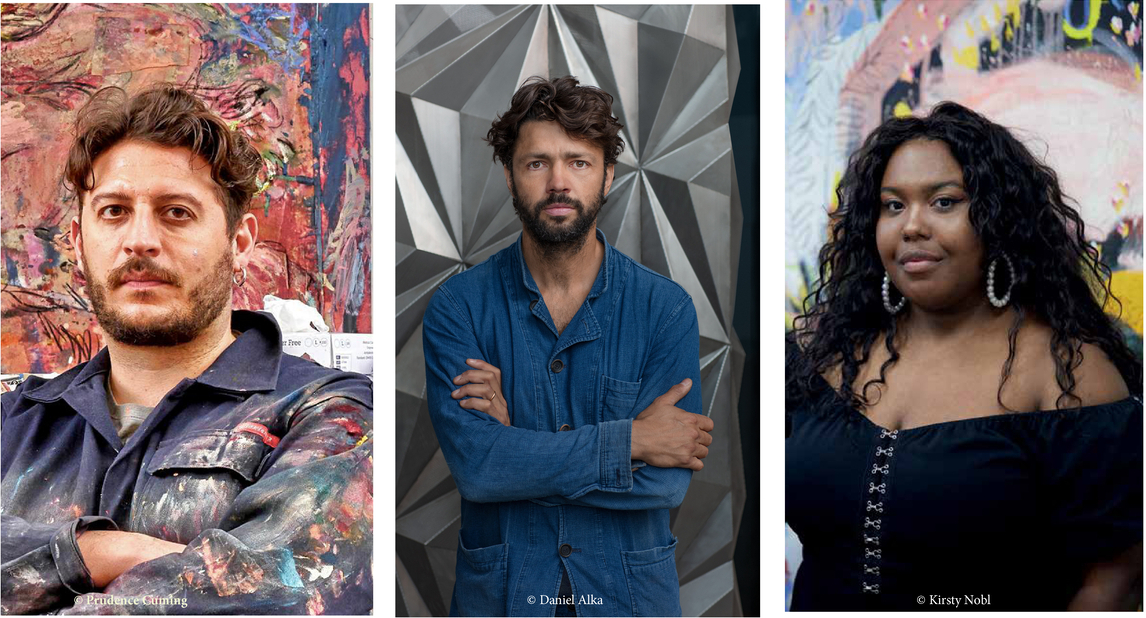 Galerie ISA is proud to present ‘Super Nature’, an exhibition bringing together the work of three talented artists; Daniel Crews-Chubb, Conrad Shawcross and Michaela Yearwood-Dan. It is curated by Jane Neal.

The title of the exhibition is a play on the words: nature, supernatural and the magical, extraordinary aspects associated with the adjective ‘super’ (such as super woman, super hero, and super nova - the large explosion that occurs at the end of a star’s life cycle). It also references the title track of Cerrone’s 1977 iconic disco album ‘Supernature’. Though the song was written decades ago, it was ahead of its time in that it has a prophetic, environmental theme that foresaw how the future might be changed by the use of artificial chemicals in agriculture: ‘the creatures down below’ might eventually ‘take their sweet revenge’ on mankind’s abuse of the Earth.

The idea of the Earth’s strata having its own life and energy - even peopled with mythical characters - fits well with Crews-Chubb’s work. His practice collates the iconic forms of gods, beasts and nudes that initially appear to have been derived from ancient civilisations and displayed in cave paintings, friezes and ceramics, but his work also continues a conversation with modernism, its monumental protagonists and with what the artist describes as ‘the age-old’ tradition of the still life. Tackling this subject was a challenge Crews-Chubb could not resist, as inspired by artists such as Van Gogh, he sought to make this genre his own. Crews-Chubb’s images layer up as one supersedes another, but as his work is process-driven, there is also a strongly archaeological element to his practice - reinforced by Crews-Chubb sanding and scraping, collaging and reworking his patient - but very giving - canvases.

Conrad Shawcross is known for creating sculptures and installations that foray into the borderlands of geometry, physics and metaphysics and engage with philosophical conceits. He has reimagined art in the public realm and expanded its dialogue with architecture. The artist’s beautifully ethereal ‘Fracture’ sculptures engage as much with absence and negative space as they do with actual form. The plant-like pillars fan out at the top before tapering in or turning, softly - eluding to notions of expansion, growth, entropy and disappearance. They also evoke the natural world and the scientific leaps and physical structures man himself has discovered and employed, like amino acids, models of DNA, or proteins. Shawcross has succeeded in evincing the often contradictory state of man and the world, and that of man amidst nature.

Working predominately in paint and collage, Michael Yearwood-Dan is developing a striking repertoire of sumptuous, vividly coloured works that draw from a rich seam of influences, observations and experiences. The artist purloins from both the realms of Fine Art and Pop Culture and supports her practice with an impressive array of cultural signifiers including millennial culture, blackness and feminism, carnival, text messaging, acrylic nails, gold jewellery and deliciously lush and inviting flora. The landscapes Yearwood-Dan conjures for us are that of a visually arresting, ‘super nature’. Hope-filled and fuelled by a back-story of germination and the infinite possibilities of propagation and growth, Yearwood-Dan’s work contains a melange of references to such diverse imagery as depictions of late-night food stations, overtly feminine stereotypes and botanical influences. The artist weaves all of these into her own decidedly personal and unique narrative. Continuously evolving, Yearwood-Dan’s work pulses with energy and shines with strength.

‘Super Nature’ is an exhibition about talent, perspicacious thinking, thoughtful reflections, rich histories and the wonders of a world which is endowed with its own amazing ‘super nature’ - one that continues to inspire, excite and enthrall.