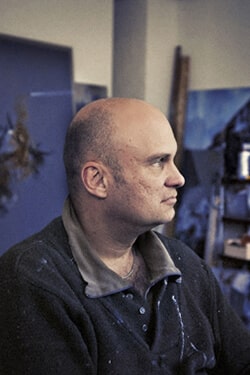 Michael Kunze (b. in 1961 in Munich, lives and works in Berlin) creates paintings undergirded by Central European intellectualism. They are often inspired by works from the 15th to the 18th Centuries, and driven by ideals and metaphysics. Kunze eschews the received ‘story’ of modern art, preferring instead to look to what has been described as ‘the Shadow-Line of Modernism’, a kind of anti-modern modernity that traces an arc from the isolated masters of painting in the 20th Century, such as Bacon, De Chirico and Balthus, through to influential directors such as Lars von Trier. Kunze’s complex, architectonic worlds hide many secrets. They are also paradoxical: the labyrinthine structures in the midst of Arcadian landscapes being at one and the same time arcane and futuristic, holding both time frames in a sole pictorial plane. We sense that there is a certain reality here, but it is not one to be found through physical exploration, rather through the activation of our imagination.

Recognized as one of the iconic German painters, in 2013 he was honored with a major retrospective at the Kunsthalle Dusseldorf, where works spanning over the past two decades were exhibited alongside a major publication. Earlier this year the artist was a recipient of the prestigious Hans-Platschek Prize in Karlsruhe, Germany. His works can be found in numerous public and private collections like the Nationalgalerie in Berlin, MMK museum in Frankfurt and the Goetz collection in Munich, among others. 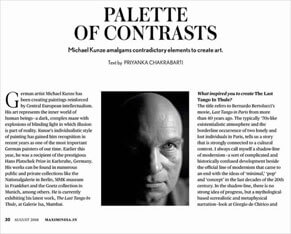 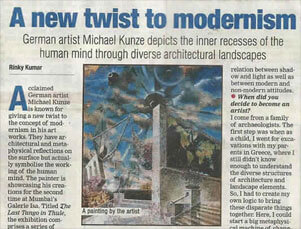