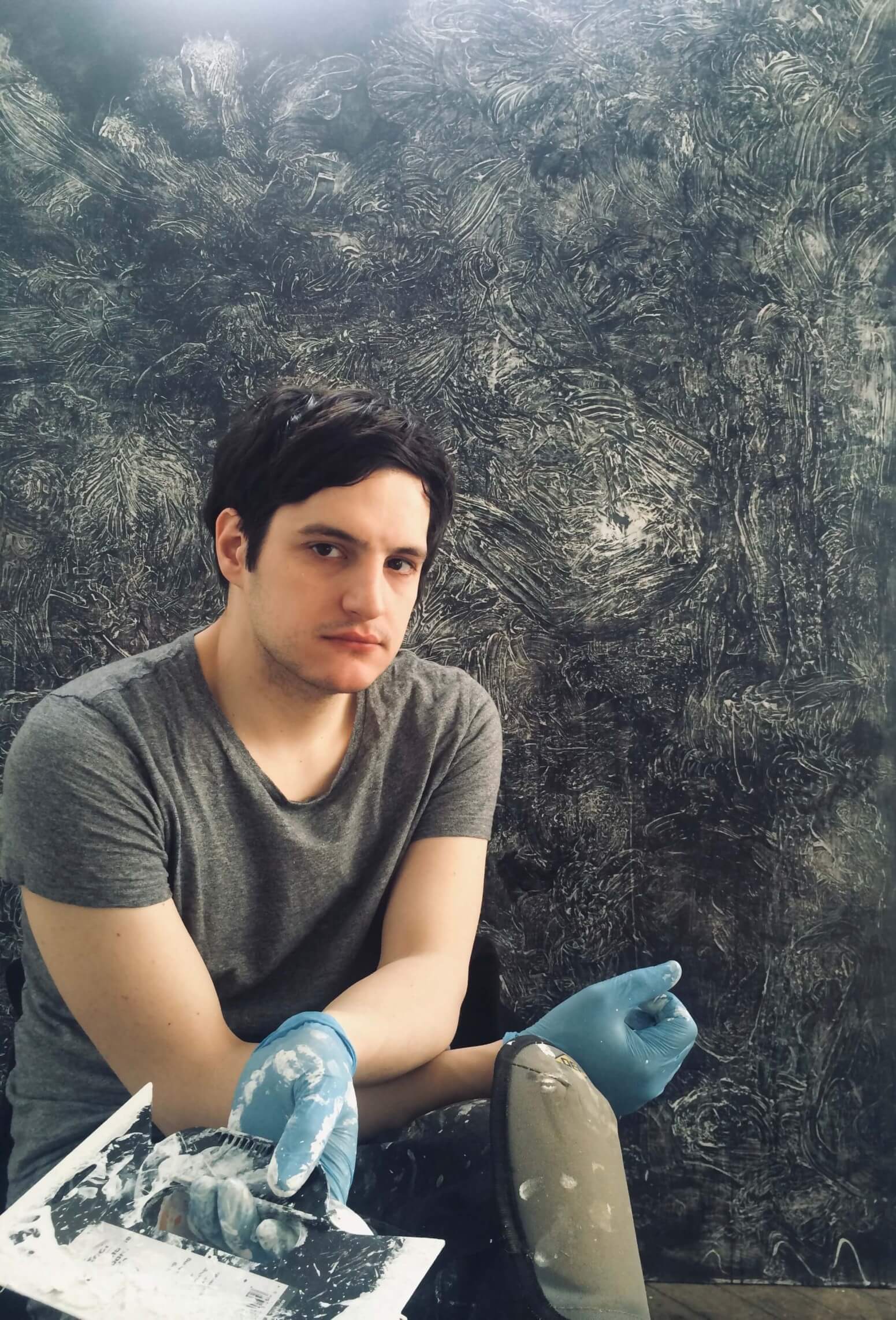 Galerie ISA is delighted to present Any Day Now, the first solo exhibition in India by the Croatian/German artist, Marin Majic (b. 1979). The artist has drawn the attention of critics, curators and collectors alike in New York (where he is currently based), and in Europe, for his intricate and invitingly tactile paintings with their densely worked, shimmering surfaces.

The undeniable beauty of Majic’s works is undergirded though by a struggle. This is connected to the working process, but it also mirrors the artist’s complex personal history as the product of two distinctly different cultures. Majic works largely from his own subconscious in order to free himself from the constraints of technical or conceptual concerns. While his initial sketches begin as raw elements, Majic revisits them at different stages in order to refine and work them to a point where each becomes a thronging microcosm of a strangely captivating, consistently believable, other world.

Majic approaches each canvas as the opening gambit of a robust dialogue, yet paradoxically, the resulting paintings feel more like a soliloquy that documents the journey of the artist’s thoughts. This is partly the shamanic nature of Majic’s process, and partly the insertion of conscious decisions that override chance and happy accidents. Majic intuitively searches and selects forms from within the many layers of his underpainting, but when the painting becomes too familial, he deliberately negates this perceived direction in favour of something new and unexpected. It’s a complicated business, riven with frustration, but the tussle is evident and this is what lends Majic’s works their depth and lifts them far from the realm of simple visual pleasure. Majic’s subject matter mirrors his process: that of the artist’s search to make a perfect work, and the subsequent trials and tribulations that inevitably occur on that journey.

As an artist hailing from both Germany and Croatia, Majic experienced what so many children of dual nationality suffer: they are labeled an immigrant by each culture because of the ‘other’ component in their gene pool, and are therefore made to feel they belong to neither world. It is unsurprising then, that Majic’s earlier works were characterized by a playful rejection of national identity politics and saturated with wild cultural appropriations derived from fairy tales, mythology, and references to Old Master works. Majic became a kind of cultural ‘DJ’, via his painting.

Following his move to New York four years ago - the quintessential city of ‘immigrants’, Majic’s motifs have again shifted in his pursuit of the rejection of the cultural and the temporal - leaving behind the figure almost entirely, for more universal tropes. Majic’s focus fell instead on the not-so-natural landscape: a magical realm of stars, forests, strange fruits and endless pools. All elements of traditional painting were now reshuffled and pushed into a continuum that borders the fantastical. Gravity seemingly has no pull in this world and Majic’s resulting compositions feel decidedly dream-like. They also hover just beyond a utopian paradise. The artist is adept at conveying the moment where threat has entered the proverbial Eden. The paintings are exquisitely beautiful with candy-like depictions of fruit on palm trees or fairy tale woodlands, but there is an ominous quality too, as if we are witnessing a moment frozen in time - the last throes of beauty before that which is ripe goes over to decay.

The tension between an almost fulfilled desire and the overwhelming possibility of disappointment is a common thread throughout Majic’s oeuvre. So is the exploration of the human longing for the Platonic blue print of original perfection. The collective unconscious recognises a design behind nature that suggests another world: one that was once without flaw. Majic alludes to this and also plays with the idea that it could lie under the surface of his paintings as he constructs layer upon layer of intricately worked textures and forms.

Though the human spirit is at the centre of these paintings, the human figure is almost entirely absent from this body of work - with one exception. In Everything Is Going To Be All Right Now, we find a man on an island, holding an axe. The symbolism is clear: the man is seemingly cutting himself off still further from his surroundings. Themes of alienation continue to resonate strongly throughout Majic’s works, emerging surely from the artist’s own experiences of being ‘other’, no matter where he makes his home. In his painting, otherness takes the form of twisted brambles, underbrush and water ripples. While the depiction of nature is very much a cornerstone of Majic’s practice, these land and waterscapes are not servants of realism. Pushing the figurative into the abstract, the emphasis is undoubtedly on the details and the patterns formed by the brushstrokes themselves. Every painstaking inch of Majic’s canvases is a colour universe unto itself, hypnotic in its richly woven threads. Gaze on these works and the act of looking becomes a state of meditation.

There is a nostalgia inherent in Majic’s practice that celebrates the former world of analogue existence but could also be a foray into a future beyond the apocalypse where nature again will dominate and human life become sub servient to its mores. In Water Narcissus I and II, Majic revisits his previous exploration of the story of Narcissus. Here we see how he creates the sensation of falling and being drawn into the shimmering water - much as the protagonist himself would have done as he bent over towards his reflection, mesmerised by his own beauty. It is a compelling theme, but it is also the story of art and artists who have to continuously confront themselves in their studios, day after day, in order to keep on producing. The act of painting becomes a means of seduction, the shifting tenor of the works’ surfaces a hypnotic draw for an eye which is never permitted to settle.

Ultimately though, what is so remarkable about this particular body of work is that the artist is making a statement through what he is choosing to omit, rather than include. In Any Day Now we find that the lens of focus has shifted back to the very essence of painting: the process itself and the magic that this unfurls.