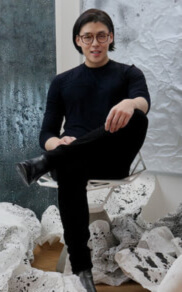 Joseph Tong (b.1981 in Hong Kong, China, lives and works between Hong Kong and Berlin) creates conceptual works through a multidisciplinary approach and a variety of media, which includes the elements of oil and ink painting, sculpture, photography, site-specific installation and media art that examine the physical reality, whilst exploring notions of alternative, multi-dimensional potentialities. At times, juxtaposing various theories, genres and processes within the confines of a single work, utilizing geometric shapes and organic forms as the principal components of abstraction. A visual linguist, Tong challenges the traditional notion of the passive viewer by achieving a sense of tension between viewer and the work itself, by combining a wide-range of highly aestheticised materials such as structured Plexiglas, dichroic film, calligraphy paper, and gauze in his works.

Tong, in a constant mode of re-invention and experimentation, creates simulations / atmospheres / settings in which familiar objects are altered or detached from their natural functions, applying specific combinations and certain manipulations of mediums to inspire different contexts; thereby questioning the conditions of appearance of an image. This allows the artist to create a visual narrative in which to debate, dissect and evaluate principle doctrines of our physical universe versus that of a virtual / parallel reality and metaphysical state of being.

Beyond the Oecumene reflects on the concept of anthropogeography (the study of the geographical distribution of humankind and the relationship between human beings and their environment). However, the works in the series remove any portrayal of humankind’s prevalence as it looks beyond, or more importantly - prior to - domination of civilization. Thus, the visual abstractions are reimaginations of a world where nature reigns supreme; in which the untouched, the unspoiled and the purity of nature prevails. Continuing the modes of practice of Atlas Obscura (2019) - where each work has a digital counterpart - image-editing software is used to create digitally generated impressions that are superimposed onto a selection of sampled images, which - in turn - leads to the creation of an abstracted visual composition printed on aluminum, mirror Dibond or on canvas. The process is then completed by hand-drawn motifs in wax pastels and / or aquarelle to further illustrate an atmospheric realm with ethereal elements. References alluding to nature and landscape draws the viewer in through a feeling of recognition. However, with several works in this series, the viewer must confront the illusory feature of the structured Plexiglas positioned on the surface of the work, which generates an optical distortion. This grants the viewer a moment to pause and observe as the pictorial elements gradually emerge and to reorient themselves to a visual narrative where both the real and unreal coalesce.