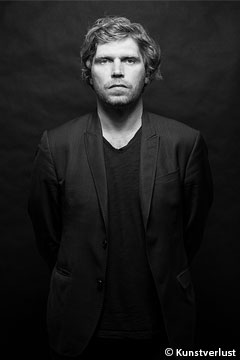 Jonas Burgert’s paintings present a world in which time is suspended, once removed from our perception of the every-day. In this paradigm – an environment which is in constant flux – human beings are depicted as unique, contorted creatures both familiar and fantastical. Often naked, sometimes splashed with the artist’s trademark fluorescent colours – a melange of acid yellows, electric blues, purples, pinks and reds – each appears to be engaged in some form of quest, the purpose of which is not immediately apparent to the viewer or, it seems, to themselves. They appear as dream-like figures, frozen in a moment of time – on the cusp of a revelation or point of awakening. The effect on the viewer is unsettling, creating a climate in which they themselves are drawn into an examination of their own temporal struggles.

The narratives in his paintings don’t have much to do with the stories films and books can tell us – rather they are allegories for making paintings. Related in places which could be studios like those you used to be able to find in shut-down factories and condemned houses in Berlin after the Wall came down. Something of the light of a glorious past flares up, just like the experience of guilt and grief does. Under the floorboards, dark abysses open up, walls fall and reveal space as wide landscapes or dark cellars, doors swing open – a Beyond is not excluded.

Considered within the context of imaginative figurative painting, from Hieronymus Bosch through to portraits by Rembrandt and Van Dyke, Burgert is unparalleled in his contemporary construction of the figurative realm. However, while the paintings are unique spectacles in themselves, they exist only to allow the artist to meditate on the myriad complexities and conflicts of the human psyche. As Burgert says: ‘It seems to me that we are human beings that recognise ourselves without actually understanding ourselves. This leads to a grotesque situation: man’s battle with his own mirror image, struggling to define himself.’

Jonas Burgert graduated from the Academy of Fine Arts, Berlin, in 1996 and consecutively studied for a post graduate title (Meisterschueler) under Professor Dieter Hacker in Berlin. Since 1998, his work has been on view in numerous important shows around the world and he has clearly been positioned as one of the most important figurative painter’s of his generation. In January 2017, Burgert will have his major institutional show at the MAMbo Museo D’Arte Moderna di Bologna, Bologna, Italy. His works can be found in several important collections around the world like the Hamburger Kunsthalle, Hamburg, DE, Museum of Contemporary Art, Denver, US, to name a few. The artist lives and works in Berlin. 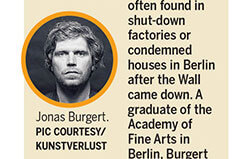 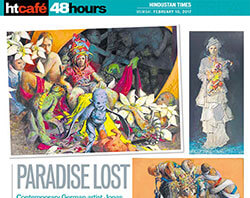 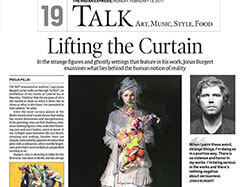 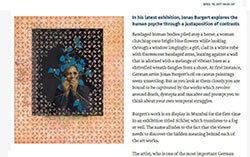 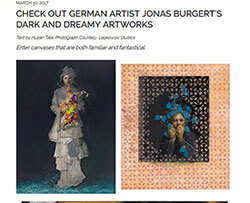