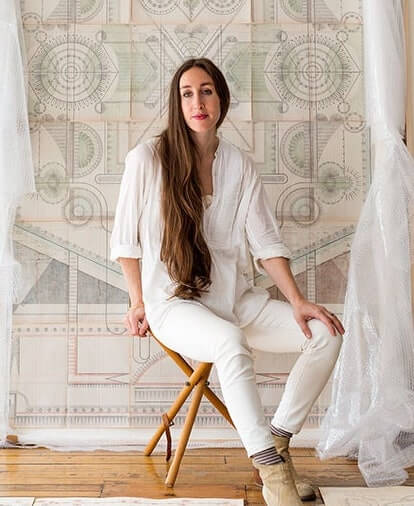 Galerie ISA is delighted to present the third solo exhibition by Louise Despont. Known for her meticulously executed, delicate drawings that hover between sacred geometry, esoteric symbols and essentialised forms, Despont is a master draughtsman whose patient commitment and meditative approach leave the viewer both enthralled and calmed. This show reveals the artist delving deeper into the realm of invisible, powerful forces, particularly in connection to the natural world. Despont is fascinated by the notion of engaging in a co-creative experience with nature. She talks of the intelligence of nature, but also of the intelligence of the human hand. By using drawing as a tool to access fields of information, the mind and hand can work in tandem with nature and through an innate intelligence, find balance and create order.

The received wisdom in Western society (at least since the 18th Century), is that it is the mind which determines our thoughts, actions, and the direction of our lives. Though it certainly holds a privileged position - one that is separate to, or above the body in Western thinking - the first field of learning is actually empirical. Embodiment theory which was expounded by Heidegger, Merleau-Ponty and Dewey in the early 20th Century, is a counterweight to Cartesian dualism, the philosophy that originated the idea of the mind disembodied from the body. ‘Embodiment’ turns the idea of the mind functioning separately on its head, claiming instead that cognition is shaped by bodily experience and processes. This allows for the possibility of the body actively shaping our thoughts and conscious cognitive experiences, rather than playing a subservient role.

The notion of the body as ‘the first field of learning’ is one that chimes with Despont. She is not so concerned with the separation between the body and the mind or even their connection, rather she perceives the human state to be far more complex and multidimensional. Despont’s sensitive touch evokes a spirituality that seems to thread its way through her drawings in a manner that is in itself suggestive of a life force.

These elegantly refined works and her spare but achingly beautiful sculptures reveal the essence of something that is felt and remembered by the body - a trace that could almost be missed - but is nonetheless poignant, like a tear stain. The works are pure in as much as they resonate with the patterns of nature, the cosmos and the energy that we feel all around and within us - but they are without agenda. Instead these meticulous diagrammatic drawings and bas-relief sculptures provide a powerful but unconscious witness to the human journey - one that is more haptic than visual. Despont is not trying to create a narrative here - instead she is opening herself up to a meditative process that allows her to channel the different abstract and invisible forces until they find their own unique visual form. Each one possesses its own inherent integrity. Collectively they resemble systems of nature, science and essentialised human form and experience: the body, energy fields, the cosmos, Indian philosophies, geometry and esoteric charts.

For all the pared-down refinement of Despont’s work, an enormous challenge drives the artist’s practice: how to represent the unseen but nonetheless powerful forces and systems that surround and inhabit us? Some of the greatest forces in the universe are invisible. We cannot see energy but we can witness its effects, even harness it. Energy cannot disappear, it can only be transferred, moved on, directed. Despont has made it her business to attempt to make the invisible, visible. In this sense, believing in the power of forces that cannot always be seen and being unafraid of engaging with the immaterial, it is unsurprising that Despont found herself drawn to homeopathy. Like many women who seek an alternative to allopathic medicine during pregnancy and for their baby after childbirth, Despont began to investigate the practice and its history. In essence, homeopathy is about ‘like’ resonating with ‘like’. So, for example, alium cepa which is derived from onions (known to irritate the nose lining and make the eyes run when cut), is one of the remedies prescribed for hay fever. What is so intriguing about homeopathy, is that it is the process of sucussion (where the trace of the remedy is repeatedly shaken and ever more diluted - sometimes until the point where it is apparently no longer there), which gives the remedy greater potency.

Despont has recently been struck by the relationship between her practice and the principles of homeopathy: the power hidden in the invisible, the tangibility of energy that can be felt, even if it cannot be seen, resonance with something that may no longer exist but still emits a signal - such as light from a star which we can see today despite the star itself having died thousands of years ago.

In her search to communicate with the natural world and visualise patterns and form, Despont began to look differently at her art works. She started to consider whether they could go beyond being a site for her to project onto, and instead began to wonder if they might be able to function as remedies in their own right. There is a precedent for this within art and within healing. The Swiss visionary, Emma Kunz is one such example and a significant figure for Despont. Born in the late 19th Century, Kunz did not think of herself as an artist, instead for her, drawing was an expression of her relationship with the divine and a means of transforming harmful energies into restorative ones by visualising the process of healing in her geometric drawings. This process also served as an aid to meditation and enabled her to find answers to spiritual and philosophical inquiries.

It is interesting to consider the idea of art as a resonating remedy. When asked to define ‘what constitutes a remedy’, Lucinda Torabi, a respected and experienced homeopath answered: ‘homeopathic remedies are essentially information that is given to a body which is already doing the absolute best that it can. We must believe in the wisdom of the body, witness what the body can do, understand that there is a process.. a remedy is a resonance, a pattern of energy that has to match the field of energy of the person who is seeking healing. The idea of resonance is key. The remedy does not actually function as a remedy for a condition unless it resonates with that particular person - this is fundamental’.

Art has to resonate with the maker and with the viewer - or it too loses potency. It is not then far-fetched to imagine art as a remedy for both the body and soul - especially when it is engaging with sacred beliefs or seemingly magical transformative processes within the body, such as pregnancy. In the 1970’s, so-called essentialist feminist artists such as Judy Chicago started to look at sexual difference as a means of furthering the feminist argument. They sought to create a feminist lexicon to validate and celebrate women’s experience and establish a feminine iconography of ‘central core imagery’. Looking at Despont’s works, both her bas relief pieces and her drawings, we can find a connection with works such as ‘The Dinner Party’ by Chicago, but also look further back to artists like Georgia O’Keefe and Channa Horwitz - a proponent of West Coast minimalism who devised her own unique, tightly controlled pictorial language which revolved around using pattern as a generative device.

While we can position Despont’s work within this art historical narrative, she feels her practice resonates more with the works of Hilma af Klint, Charles Burchfield and Agnes Martin (as well as the afore-mentioned Emma Kunz). It is not hard to see why she cites these figures - notably af Klint who besides being an artist (and one of the first to make abstract works), was also a mystic. Like Kunz, there is a healing element to af Klint’s practice which returns us to the idea of producing a healing drawing.

For Despont, the process of how information can be embedded and transferred through pattern is key. She describes how the use of pattern in sacred spaces can engender an unconscious impact which goes beyond awe and beauty. We can enter into a resonance with a pattern and be changed by it, as it can become the conduit for the transference of information. Homeopathy has become a source of inspiration for Despont’s practice in terms of the use of pattern vibration in healing, but also because of the importance of resonance and - again - the notion of innate intelligence and the importance of having trust in our body. It might almost elide tangibility, but the power of the unseen force that is enabled to resonate with the mind and the body is absolutely palpable and emanating throughout the works of Despont in this show.