In and Out of Time

In and Out of Time brings together the artists: Diana Al-Hadid, Adrian Ghenie, Idris Khan and Michael Kunze. The title of the exhibition is paradoxically specific and obscure. It refers to the human experience of a linear reading of time, of living within a specific period of time, or looking back on a certain period of history. It also suggests a dislocation, of being either anachronistic or ahead of one’s time. There is though, another possible interpretation, a musical reading, of being ‘in step’ with a time score (or out of time).

The artists reflect these different positions of engaging with time in their various art practices. Diana Al-Hadid (b.1981 Aleppo,Syria) references art from the past in her work, one such example being ‘The Allegory of Chastity’ by the Flemish Primitive, Hans Memling, which Al-Hadid used as a starting point for one of her recent installations. The painting depicts a woman piously standing in the centre of an imposing mountain. Al-Hadid used the image as the basis for one of the panels of her installation because she was so struck by how the woman appeared to be grafted onto the mountain.

Additionally in Al-Hadid’s practice, there is often the sense of history repeating itself – an effect that Al Hadid achieves at times by catapulting the viewer into the future and affording them a unique perspective of being able to not only look back on man’s collective troubled past, but on the crises and follies all too apparent in our own contemporary world. Al Hadid has also looked to literature to provoke her creativity. One recent example being the character of Gradiva (‘the woman who walks’) who originally appeared in a 1903 novella by the German writer, Wilhelmina Jensen. The story of Gradiva was popularised by Sigmund Freud four years later in his 1907 essay about dreams and delusions. Freud used the story as a metaphor for the psychoanalytic process but in Jensen’s original tale, a young archaeologist discovers a Roman bas-relief of a beautiful woman walking. He is fascinated by her form and becomes convinced that he can recognise it in a woman walking down the street, and then he dreams of encountering her in the ancient city of Pompeii. We later learn that his obsession is rooted in a repressed memory of a childhood love. Al-Hadid’s fascination with Gradiva can be linked to her deliberate use of repetition of particular forms in her work, which she re contextualises again and again in different guises.

Adrian Ghenie (b.1977 Baia Mare, Romania) has been described as ‘the history painter’. While it is true that the artist is personally fascinated by history and most notably by figures and events from the time of the 19th and 20th Centuries, his remarkable technique and unconventional, dramatic compositions have captured the attention and imagination of lovers of painting across the world. Ghenie succeeds in using the plastic qualities of paint to cut a cross section through time to bring together in one ground, the real and the imagined, the found and the remembered. A master storyteller, he uses his robust paint handling and powerful colour combinations to draw the viewer into complex worlds that balance the figurative with the abstract and allow us to see into and observe the events and characters from the past who have so captured the artist’s imagination; be it positively or negatively. Ghenie’s often epic paintings reveal the dramatic and sometimes devastating effects of ideologies metered into actions through the twisting of manifestos and the abuse of position and power. If history and art history are Ghenie’s greatest sources of inspiration, then cinema and the Jungian notion of the collective unconscious are his help mates: with Ghenie appreciating to an acute degree the extent to which our minds are both shaped by and connected to each other through shared phenomena and virtual, as well as physical, experiences. Looking at his paintings we are spun from our own time into the past, into history and into the fantastical. All scenarios though feel convincingly real so consistent is his painterly language.

Idris Khan (b.1978 Birmingham,UK) draws the inspiration for his practice from diverse but consistent sources. He looks to the history of art and music as well as to some of the most significant philosophical and theological texts. His work involves the investigation of memory and creativity, but it also considers the layering of experience which the artist mediates through the physical act of a continuous process of creating and erasing, or adding new layers whilst retaining traces of what has gone before. He first gained attention for work in which he used digital technology to overlay and combine series of visual or textual work: every Bernd and Hilla Becher photograph of a gable-sided house, every page of the Quran, every late Constable painting, every stave of Chopin’s Nocturne. Repetition and action have always been central to Khan’s practice along with a restricted set of processes. There is the distinct sense of ‘beating time’, of going back and forth while simultaneously bringing a new creation into being. In the past, Khan’s earlier works drew on pre-existing cultural artefacts and were about creating a whole from discrete parts, however his more recent series of works introduce another layer of mediation and are resolutely hand-made. Printed texts are stamped in densely overlaid geometric shapes on the surface of paintings, works on paper, sculptures and wall drawings. The texts are drawn from the artist’s own writings in response to classic art historical, philosophical and religious tracts.

Michael Kunze (b.1961 Munich,Germany) has been committed to the medium of painting since he trained at the Academy of Fine Arts in Munich in the late 1980s and early 1990s; a period when the burgeoning possibilities of the internet and digital imaging were enthralling artists and painting was perceived as redundant. Kunze has bucked the trend in a contemporary art world that takes its cue largely from a focus on Americanised pop culture. Rather, his paintings are undergirded by Central European intellectualism, often inspired by works from the 15th to the 18th Centuries, and driven by ideals and metaphysics. Kunze eschews the received ‘story’ of modern art, preferring instead to look to what has been described as ‘the Shadow-Line of Modernism’, a kind of anti-modern modernity that traces an arc not via the avant garde, but from Nietzsche’s tragedy studies and the isolated masters of painting in the 20th Century, such as Bacon, De Chirico and Balthus, through to influential directors such as Lars von Trier’s. Kunze’s complex, architectonic worlds seem to hide many secrets. They are also paradoxical: the labyrinthine structures in the midst of Arcadian landscapes being at one and the same time arcane and futuristic, holding both time frames in one, pictorial plane. We sense that there is a certain reality here, but it is not one that we will find through physical exploration, but through the activation of our imagination.

The suggestion that arcane motifs though – to a certain extent – emptied of their original meaning when they make contact with the present, still contain a remnant of their past significance, brings us back again to the question of time’s role in our lives, and to artists’ engagement with this phenomenon; what Einstein described as: ‘the fourth dimension” (albeit acknowledging its indivisibility from space). Time is often fragmented in Kunze’s paintings, we find the appearance of worlds that are simultaneously retroactive and futuristic; but neither firmly of the past nor committed to the present. In common with all the artists’ works in the exhibition, the strangely ‘out of time’ landscapes succeed in jolting us into questioning our own dislocation from reality and the world we inhabit, and examining our preconceived notions of how the past and the contemporary have and continue to function.

The science fiction writer, William Gibson, declared: ‘Time moves in one direction, memory in another’. This schism that grows ever wider with age, is nonetheless one of the most unifying experiences of being human. It is also the conundrum that captures the imagination of all four artists in this exhibition; for time is the one thing in our lives we cannot bend to our will, and as a consequence, it is perhaps the greatest unstoppable force we contend with. 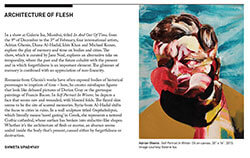 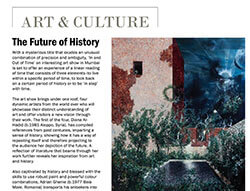 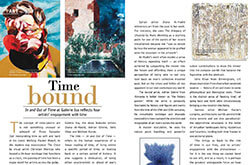 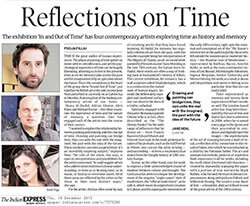