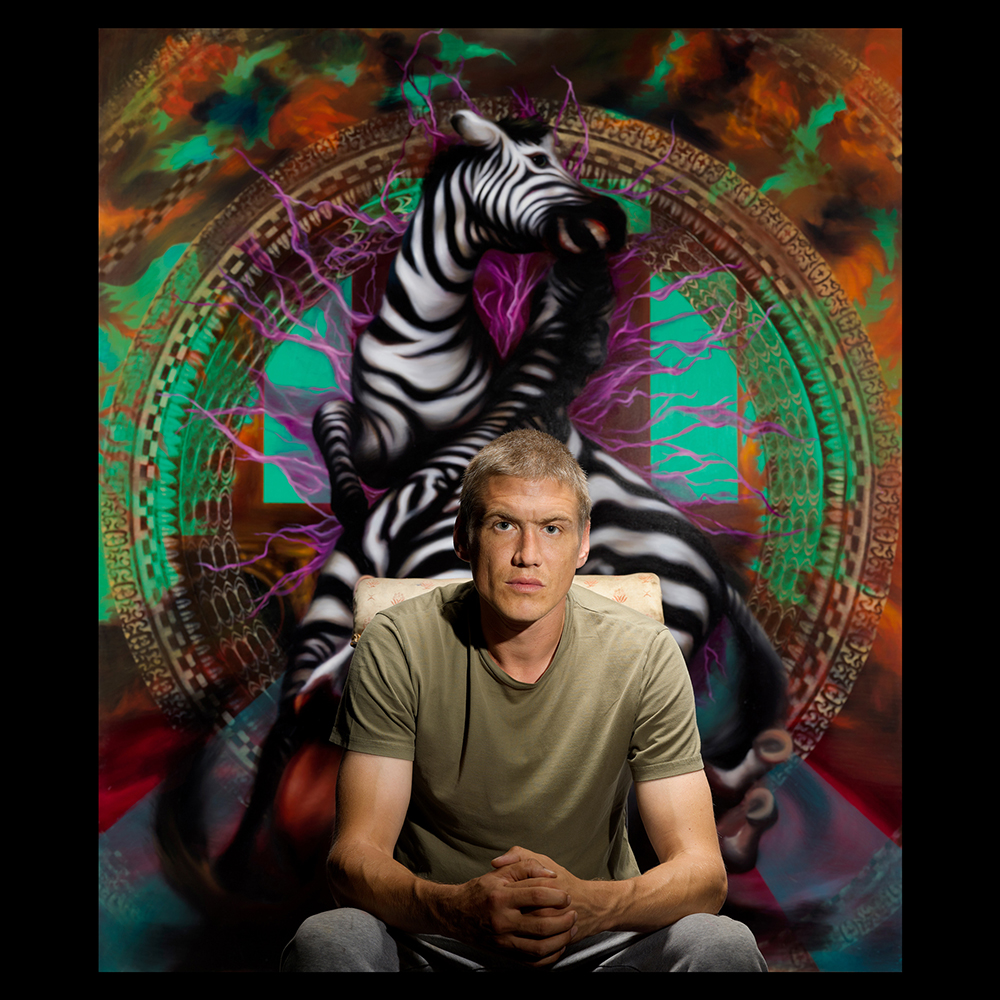 Galerie Isa is delighted to present Crucible, the first solo exhibition in India of works by the British artist, Hugo Wilson. The title of the show is taken from one of Wilson’s paintings in the exhibition. This particular work is constructed around a complex composition that combines various, disparate elements originally depicted in a painting by the 18th Century artist, Joseph Wright of Derby. The subjects include an astrolabe as well as a glowing ceramic crucible in which metal compounds or other substances would have been smelted.

Wright of Derby lived during the Enlightenment period and recorded - with apparent fascination - the development of science out of alchemy. He also captured the spirit of the Industrial Revolution. Wilson is clearly enthralled by this period in history, but overarching this is his ongoing fascination for man’s search for meaning throughout the ages, through the exploration of different belief systems, ideologies, myths and the growth of scientific knowledge and impact of new discoveries.

In common with many artists of his generation, Wilson uses the almost bottomless well of the internet from which to draw inspiration and to source and explore a vast array of different imagery, objects and occurrences of historic importance. By using the ancient and highly plastic medium of painting as a ground upon which to bring together elements that might initially seem entirely unconnected, Wilson has the advantage of harnessing an established, global language that can mix and meld things together in coherent form.

Whilst the painting Crucible was the genesis of the exhibition (because it incorporated the highest number of factors inherent in Wilson’s current practice), the act of painting itself could also be seen as a crucible because of its ability to combine and transform various elements. The crucible is an evocative symbol for different ideas or ideologies bubbling away, sometimes smelting or transforming, sometimes evaporating and making room for newer possibilities. Though parts of the world are increasingly secular, many people continue to hold onto a profound belief in a life beyond this earthly one, and to pursue different ideas around faith and ideology. We have seen how the western world in particular has struggled to comprehend how people might become radicalised and so seduced by extremist beliefs and ideologies that they would be prepared to die for them and to kill others. Indeed even for those who wish to live peaceably, the idea of holding this world lightly is actively encouraged by many of the great faiths, and it is not so hard to see the logic behind the possibility of an afterlife, especially given that humans are programmed to live life in a linear fashion, creating a timeline from the cradle to the grave. This was the precursor to the existentialist crisis: what is the point in living if we are born to die? And it prompted the writer C.S. Lewis to comment that our linear mentality only really makes sense if we recognise that we were always meant to see things from an eternal perspective: as souls with bodies, rather than bodies with souls.

Wilson is clearly open to considering these notions, but also to observing how - throughout history - humans have constantly constructed, deconstructed and reinvented ideologies and symbols to serve them. The speed at which things can morph and change today though can be frightening. One could argue that thanks to the prevalence and power of social media, the means to see and react to new trends and to forge a pack-like response that can lead to political upheaval and even societal unrest is disturbing. Frenzied reactions to rolling news and topical dramas are not uncommon and have - at times - reached fever pitch.

Wilson is clearly open to considering these notions, but also to observing how - throughout history - humans have constantly constructed, deconstructed and reinvented ideologies and symbols to serve them. The speed at which things can morph and change today though can be frightening. One could argue that thanks to the prevalence and power of social media, the means to see and react to new trends and to forge a pack-like response that can lead to political upheaval and even societal unrest is disturbing. Frenzied reactions to rolling news and topical dramas are not uncommon and have - at times - reached fever pitch.

Could it be that the medium of television and the familiarisation with a screen - not to mention the interactive nature of the internet and the addictive pull of passively browsing online has encouraged us to see everything as a possible ingredient for the great world crucible? After all, so many things appear to have an air of impermanence about them - or at least they’re imbued with the possibility of transformation - be it the human body, or a specific situation.

The Crucible in this exhibition is a melange of imagery from the afore-mentioned Wright of Derby painting, but it also purloins from the fixed religious language of paintings two centuries beforehand, and from a computer game Wilson used to play in the 1980’s. Alongside Crucible is Muster. It borrows form from a Tiepolo drawing and reconfigures sacred imagery with the profane; in this case the hunt. The assemblage is a strange menagerie, an acid twist of two iconic but diametrically opposed themes that though not explicit, are still readily identifiable and hyper referential.

Place is a work that is also constructed from differing viewpoints. The rock is taken from an instagram post by one of Wilson’s friends while he was on a trip to Alaska to discover and explore formerly unchartered territory. Wilson describes how he enjoys the idea of approaching sacred spaces with the same chaotic premise as he addresses his other subjects. There are clear Baroque references here although as the two halves of the painting are a similar size and complementary in colour, the resulting image is more reductive than flamboyant.

Both Rebel (a study) and Reduct are a continuation of a series of works that are hyper referential. In this case the references cross and recross each other in an intensely layered manner. Instead of referencing things directly or indirectly, Wilson’s intention is to create a subject-based work that may appear recognisable or familiar to the viewer, but just as they may start to believe they can understand and deconstruct some of the forms within an essentially amorphous shape, and the eye and the brain feel more comfortable, Wilson

Dazzle take its title from the Bomberg series of works based on the specially formulated dazzle paint of warships (a painting technique introduced as a way of camouflaging ships during the First World War). Dazzle’s contrasting stripes and curves create an optical illusion - one that would have broken up a ship’s shape and obscured its movement in the water, thus making it difficult for enemy submarines to identify it and destroy it. Painted in bright colours to a formally sharp patchwork design of interlocking shapes, the spectacular dazzle style was heavily indebted to Cubist art. The inventor of dazzle painting, Norman Wilkinson, was influenced by avant-garde British painters such as Wyndham Lewis and David Bomberg.

Bomberg is an artist of particular interest to Wilson, as while his work is often described as abstract, there is form behind the flatness, thanks to the influences of cubism and futurism. By creating a strong, grid-like structure to build his vivid colour schemes, he can also be compared to the Hungarian-French painter, Vasarely, the forefather of Op art. Wilson draws from both these artistic ancestors, delving into optical illusion and plumbing the modernist grid, but he also combines this with compositional elements from the Baroque period, such as pyramids and circles, and heightens the tension in these works using dramatic lighting and changes of scale.

Though realised in sculpted form rather than paint, Wilson’s bronze sculptures continues his exploration of how far the human mind will allow itself to journey alongside the blurring or deconstruction of an iconic form or platonic blueprint, and yet still try and find the essentialised form it suspects to be hidden within. The collective unconscious is triggered by certain familiar tropes such as diagonal twists and turns that resemble classical contrapposto or multi-figure compositions that evoke scenarios familiar from myths and biblical stories. The lack of clarity in terms of formal content, and the physical act of apparently shrouding the form we suspect to be present but obscured, serves as a strong metaphor for many of our own ideas about faith or religion, where we often search for something we want to believe is there -whether or not it is tangible.

There is an almost inbuilt pull towards discovery in obscurity, or to finding form in apparent formless matter - even when (in the west at least), society is dominated by apparent secularism and doubt is prevalent. Still, there is hope, and still there is longing: Wilson’s crucible may yet be able to offer up an answer, or at least draw us back to the point of seeking for one.