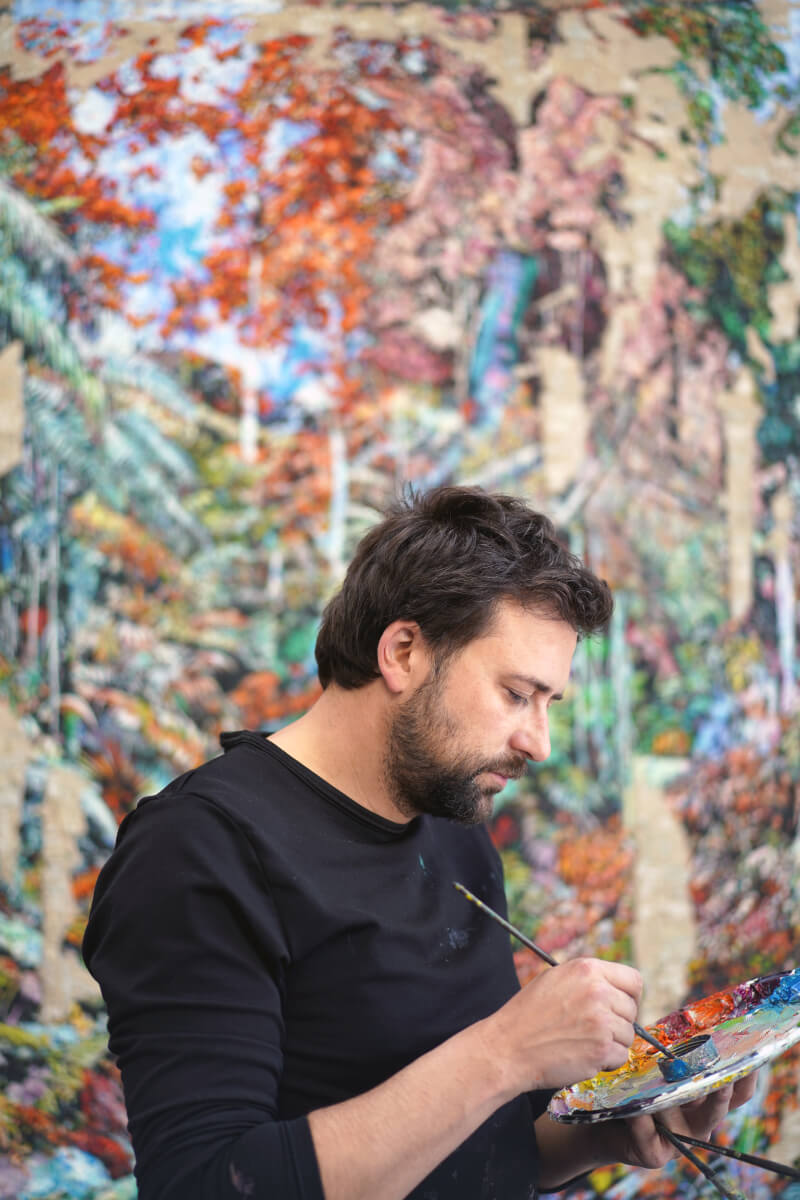 Landscapes are places that allow us to confront memories. They are the keepers of a vast paroxysm of half-forgotten remembrances, hidden in the shadows of the spaces of our imagination. As keepers of memory, landscapes are also the guardians of time – moving slowly to their own rhythms, like musical notes set to an abstract tempo. So perhaps landscapes are the intersection of time and memory in a vast expanse of space. And so, it is also true that landscapes and culture are not easily separated; where one comes alive in the presence of the other. But what would happen if one was absent from either of these? How would we recall that loss or negotiate the void?

Santiago Giralda lives in La Cabrera, Spain, a place that he has chosen to isolate himself in during the wake of the pandemic that has laid siege to our understanding of time. The artist has left his home in New York, that toothy island of concrete, to return as so many of us did, to the homes of our childhood where we could escape the expanse of time we now spend in isolation. Time meanders between the ever present, the long slow movement of endless expanse that is punctured by the memories only of time past. As Santiago excavates his archives, dusting off the layers of both time and distance, until eventually he arrives at the image, he meditates on this. As the meditation process begins, the image and his mind become crowded with remembered stories. Giralda then distorts and manipulates the image always aware that “landscapes are territories of consensus.” In this process he gives away ownership, placing it instead before the viewer - a landscape reclaimed by a dual negotiation - firstly between the viewer at the gallery who observes these works directly and secondly the viewer who goes away and uses their imagination to continue the viewing process, one which is no longer tethered to the image itself.

Perhaps the questions that we ask as we encounter these works go as far back as the questions once posed in relation to landscapes and their role within art practice – are landscapes the viewing of space through the lens of culture? Are these inverted or perhaps subverted images those of our urban lives? Is Giralda asking us to renegotiate our understanding of space and therefore of memory in time?

Perhaps though we should begin here – at the very heart of the matter – how we see and - in the process of seeing - how we understand? As we encounter space our eye travels to encompass all of what we see, it takes in everything and it absorbs the world within its view. As we turn to the landscape, and these unbroken vistas of a slow rhythmic language, we notice even the slightest movement of a leaf, the underside of a bird taking flight, the gossamer quality of grass meadows touched by the wind; and all of a sudden, the three-dimensional world of these landscapes comes alive. GIralda’s work is an exploration of these in-between spaces. His large-scale works are as much an ode to the landscape of his imagination as they are a celebration of the reality.

In Giralda’s works we are reminded of an orchestra tuning its instruments, a rush of anticipation, the quiver of unified tones, until finally and at last they are conducted into a symphony. Take for example, Eclipse, where deep shades of tomato red fill the canvas, great rocks create borderlines for the natural world, a cavity filled with lotus form the foreground to this work. As our eyes travel across the canvas we begin to hear another language, scales dissolve, great trees shrink, papyrus and agave abound, and the seemingly tropical landscape unfolds before us as we reorient our senses.

Giralda’s process begins with images he has taken of the natural world in urban cities - New York and Rome. These became for him the vehicles of escape, places that he could retreat to, spaces that were suggestive of vision in ways that, for the artist, make seeing and making visible again. But for the artist, these images are also the starting point from where the viewer can transcend and transmit the languages that lurk behind the works themselves. Giralda is always aware of his art practice, that treads very carefully between the abstract and the figurative. He knows that he wants to be able to communicate to his audience, in order to create a dialogue with them, as he draws them into his journey. Giralda offers the seduction of the natural world as a means to first engaging the viewer. Once enthralled, they are met by the artist’s translation of space – colours, forms, the forces that are at play and returned to Giralda’s certainty that landscapes, like languages, are a human construct.

As Giralda reclaims the territories of his exploration, vast and great cities begin to shed their forms, a corona of buildings disappears and merges, and these spaces both real and imagined reclaim the built worlds themselves. The layers of metaphors in Giralda’s work are constantly at play. How do we encounter urban spaces? How do we negotiate the natural world? How do we reconcile the two? Talking about his work Giralda says, “It is a way to reclaim nature in the human environment and to reflect on the concept of the native landscape and the influence of urban development.” This is perhaps most apparent in the artist’s work Paradise. A strange and haunting image, a world within worlds. A spiral staircase stands at the centre of the frame, it seems to be endless, constantly turning in the gyre, bristling with movement. In the background stands a deserted building, resembling a great glass dome. The artist lets us contemplate this image - are we seeing the insides of a botanical garden, gardens that are symbols of man’s determination to control nature? Or a building that was once teaming with people and language, now completely re-inhabited by the natural world, a Chernobyl of its time? How do we encounter this territory? What language should we speak when we enter? Does it matter? All these questions the artist seems to be asking of us in this work. This, like so many of Giralda’s works, is a tropical landscape that both is and is not steeped in reality. We are always reminded of what he says, “It is a way of seeing and making nature visible, where the cultural influence we have received also plays a role. Still, also, in my painting, the landscape is a transcendent territory.” A transcendental territory as much as it is a transient space.

Giralda’s works are like little, secret spaces. Places one is reluctant to share and to be guarded from the eyes of others. When one discovers them, it is like coming across a unique archaeological find - except these spaces also communicate to the explorer in a language that only they can understand. They are rare and precious treasures.