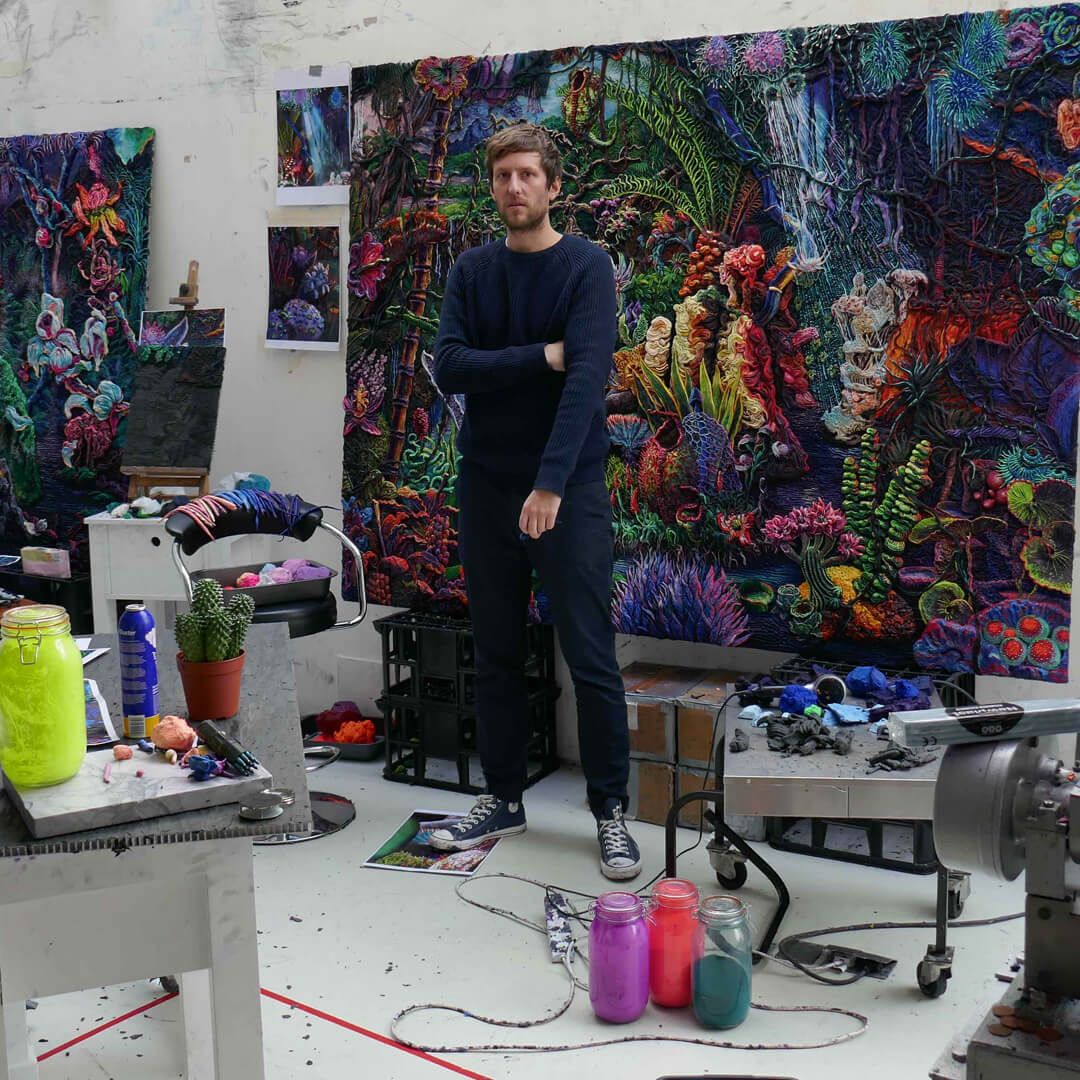 ‘Why did you paint a couch in the middle of the jungle?’ The artist Henri Rousseau was asked. ‘Because one has a right to paint one’s dreams.’, he replied.

Galerie ISA is pleased to announce the first solo exhibition in India by the British artist, Henry Hudson (b.1982. Bath,UK). The evocative title of the exhibition: ‘At Some Point in Time’, suggests a magical moment, unbound by our linear reading of time. Instead of being fettered by the concepts of past, present and future, certain experiences or vistas belie that notion. Impossible to locate in history, they stand outside, portals to other worlds perhaps, or windows into dreams.

A graduate of Central St. Martins, the London based artist’s practice is best known for his radical use of plasticine as his chosen medium. Hudson originally started using plasticine when he discovered it was an economical way of achieving the thick impasto surfaces of the traditional school of oil painting he was exploring, inspired by the influences of Van Gogh and Kiefer. As he developed his practice, he soon discovered the theatrical and expressive qualities peculiar to the medium, which offered him an innovative and exciting way to develop his painterly technique, focus on materiality, and his passion for gestural expression.

If dreams they are, then Hudson’s visions are the most vivid and vital. The selected works for this show are all from his Jungle series. As one might expect, the colours in the pieces reflect the exotic landscapes they depict - along with the weight of tropical weather and gloriously dense vegetation. The artist is described as a painter - for the surfaces of his wall-hanging works do indeed look - at first glance at least - very painterly. In reality though, the medium is actually something far more sculptural. Paint can be impastoed and thickly buttery, but these works are created from plasticine and are perhaps more accurately described as ‘bas reliefs’.

Hudson’s desire to ‘form’ rather than paint might have arisen initially from a pragmatic, economic drive as he himself has suggested, however, the complex and labour-intensive nature of his works, along with the rather ‘high fi’ associations of the aluminium grounds they are placed on, dictates that these pieces are far from child’s play. The eye-popping vibrancy of the jungle scenes, twinned with the meticulous workings of the clay, render them mesmerising and arresting.

Hudson talks of how he is the progeny of two makers: his mother is a chef and his father, a sculptor. Interestingly - and unsurprisingly given his familial roots - we can feel just how comfortable Hudson is with the process of forging an image (or frieze), from a tangible and tactile material. The adept way he pushes the plasticine far beyond the context that the producers of the medium surely ever envisaged, shows us that Hudson understands just how to manipulate the clay to achieve his ends. It’s not only the facility of the artist though that delights the eye, it is the visions he creates to enthral us. There is a certain obsessive, even ‘other worldly’ quality to Hudson’s practice. Interestingly his grandmother was an extraordinary mathematician. She worked at Bletchley Park as a code breaker but later in life went on to make scale models of grand Georgian houses. Her remarkable - even obsessive - attention to detail impressed the young Hudson. He describes how the labour intensive nature of her work must have also informed his own practice. Like her houses, at times, Hudson’s jungle scapes function almost as a calming meditation for the artist. They are an exercise in riotous colour and joyful form, but also in patience.

Hudson didn’t begin with the jungle though. He made his reputation from re-imagining Hogarth’s ‘ A Rake’s Progress’ as a modern day morality tale, detailing ‘The Rise and Fall of Young Sen - The Contemporary Artist’s Progress’. Since this time, though Hudson has continued to use plasticine as his medium of choice, his subject has become a great deal more celebratory.

Hudson uses both found imagery of jungles and photographs he’s taken himself as starting points. However at no point is he trying to create a virtual biosphere, rather his visions are a means of escape and a theatre within which the imagination can take refuge.

Much as CS Lewis created the constant and consistently believable world of Narnia that his protagonists could escape into through a wardrobe or painting, so Hudson has forged his own kingdom for us - and him - to enjoy. Like Henri Rousseau (and it is surely impossible to look at Hudson’s works without thinking of him, along with Gauguin and Van Gogh as sources of inspiration), Hudson clearly revels in the exotic, dream-like element of his jungles. Rousseau never traveled to the jungle and his strange scenes were concocted from his imagination. His inspiration was drawn from an album of 200 illustrations of wild animals, published by the Galerie Lafayette store, and visits to the ‘Jardin des Plantes’ - the botanical gardens of Paris. Rousseau talks of how, when he stepped into the hot houses and saw the plants from exotic lands, it seemed to him that he was in a dream. Though now we credit Rousseau as being one of the fathers of modern art, and Picasso in particular, appreciated his innocent, untrained approach which he felt to be free and refreshing after the constraints of the academy, Rousseau was often castigated for his ‘strange’ surreal-like assemblages. Once he was taken to task for painting a couch in the middle of the jungle. When quizzed as to why, he replied, simply: ‘Because one has a right to paint one’s dreams’.

This question could also be turned on Hudson: why plasticine jungles? Surely the answer would be the same. It is the artist’s right to execute the visions he alone dreams. And it is our good fortune that he chooses to share them with us.