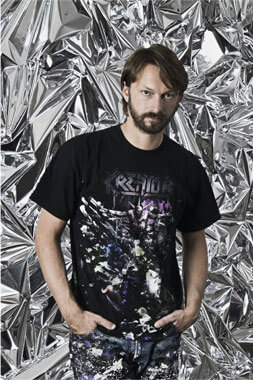 Anselm Reyle (b. in 1970 in Tübingen, Germany, lives and works in Berlin) In the late 1990s, Anselm Reyle began to produce large-scale abstract paintings, found-objects sculptures, and installations with radiating neon colors. Exploring unconventional materials such as Mylar foil or mirrors, Reyle expands upon the prevailing aesthetics of painting and sculpture.

While he is well known for his use of unusual materials and physical alterations, Reyle’s work is grounded in art historical schools of abstraction dating from the early 20th century, including Art Informel, Cubism, Op-Art, Minimalism and Pop Art. And while Reyle often works within the tradition of object trouvés he does not rely on appropriation, instead Reyle uses his highly refined aesthetic vocabulary to question the role excess plays in the postmodern market by collapsing and mixing these various traditions in unexpected ways. Indeed, by exploiting both historic languages and simultaneously developing an evolving vocabulary of new industrial practices he is able to reflect upon the various “blind alleys of modernity.”