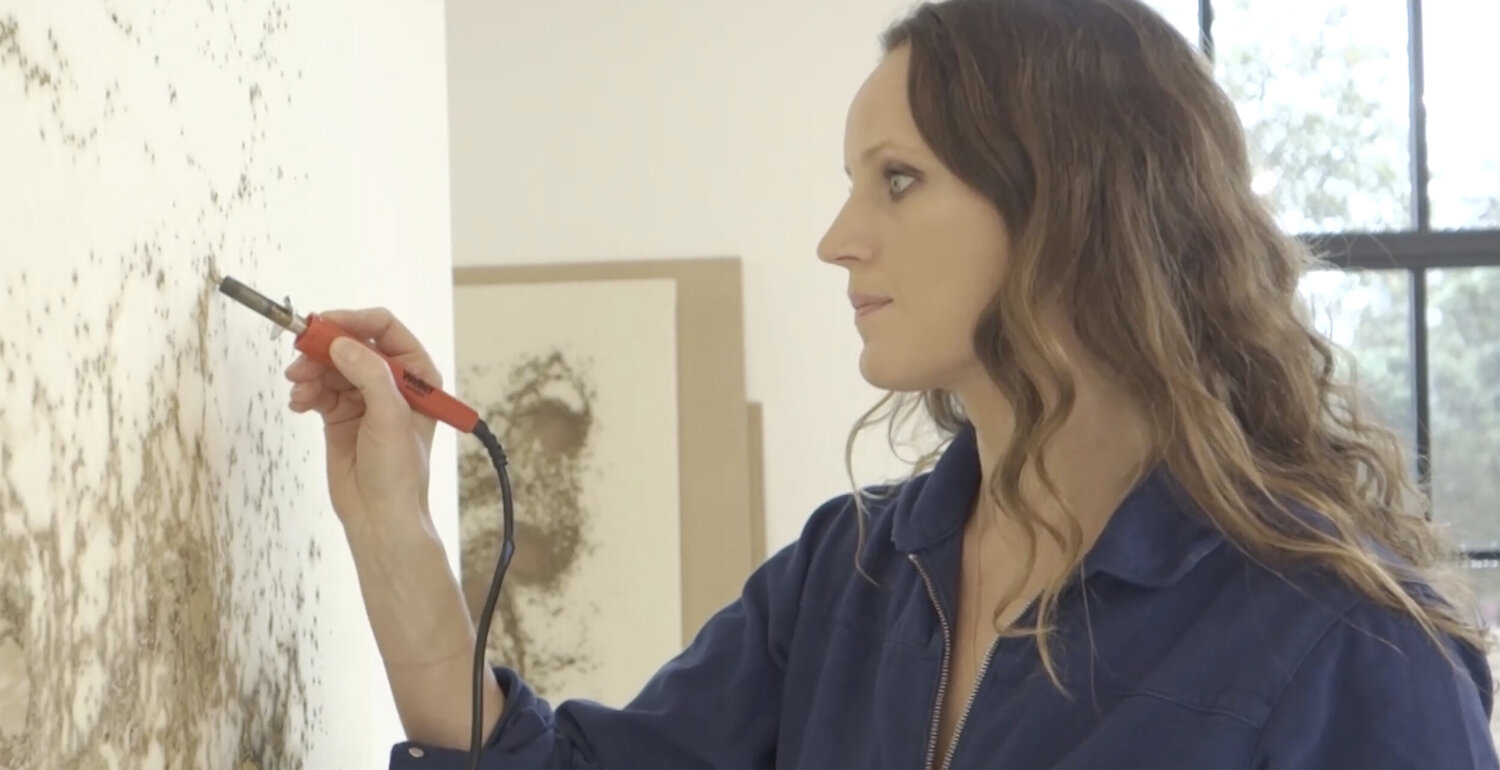 ‘I saw the different things you did, But always you yourself you hid’
‘The Wind’
By Robert Louis Stevenson

Galerie Isa is delighted to present the highly evocative and delicately beautiful works of Emilie Pugh. The artist draws inspiration from nature and belief systems, operating at the boundaries of the spiritual and scientific, the material and the immaterial. Rather than simply focusing on completing a work, Pugh allows the journey of ‘making’ to throw up new challenges and questions for her to explore - which in turn become embedded in each piece she embarks upon. This is sometimes evident in the artist’s mark-making which may begin to gravitate in a certain direction when lines or circles are repeated time after time and the deliberately slow, rhythmic act of repetition becomes transformed into a meditation - with the artist becoming entirely enthralled by the process.

There is a tension between the transient and the permanent in Pugh’s practice, between form and negative space, the material and the immaterial. The deliciously tactile surfaces she presents - sometimes so activated they take on the appearance of bas relief sculptures - point also to absence, or even to the void. It is more than the creation of little holes in Pugh’s chosen material or medium that suggest this, it is the weight of the notion of the void that the artist brings to bear within the midst of something powerful, yet fragile. In Pugh’s ‘Cyclone’ series, the works are forged from six gilded panels, separated by a gap so they protrude from the wall, but the centripetal force that makes the circular motion we associate with whirl pools and cyclones is balanced by the centrifugal force that repels away from its centre. Pugh creates this negative space by burning into the sculpture, thus creating a void.

Given this paradox, it may sound as though Pugh’s work is at a crossroads of contradiction, but it is not so. Rather she succeeds in achieving something very rare and special. Pugh manages to convey the forcefulness of nature and the interconnectivity of all living things - inspired by both micro and macro perspectives and conflicting or confluent universal forces - while sacrificing nothing of intricate detail or intimacy in her art practice. It is as if the artist can immerse herself in the midst of nature, hear its sounds, feel its pulsing energy, see its wonders and then tell its stories through the act of art making.

Perhaps the best analogy for describing what Pugh does so well is to consider the wind. We always find its traces, see what it moves, hear how it vibrates, whistles, howls even - yet always - as Robert Louis Stevenson so well describes in his poem - the wind remains hidden. Pugh herself is tangibly embedded in her work: we feel the trace of her deft fingers patiently burning tiny circle after circle into a piece of Japanese paper and her dialogue with the Fibonacci sequence - a set of integers where each number in the sequence follows the rule that every new number must be equal to the sum of the preceding two numbers. The Fibonacci sequence is found in many different incarnations in nature. Some have argued that it is nature’s ‘secret code’ or ‘universal rule’ for building perfect structures using the golden ratio. The pattern created by the sequence is a logarithmic spiral. This can be found in the nautilus shell, pinecones, petals and notably in the sunflower’s splendid head - but it also occurs in hurricanes and gargantuan galaxies.

Pugh explores different examples of the Fibonacci code at work in nature. She has created her own large-scale, shining sun entitled: ‘Helios’, based on the seed head of a sunflower in brilliant gold which she reveals to the viewer by burning a series of spirals into paper in order to expose the gold leaf that lies behind. The large scale and the fierce majesty of this piece draw us back to the association of gold with deities and sacred geometry. The special symbolism attached to gold, its importance for religious ceremonies and sacred contexts thanks to its purity and constancy (it does not tarnish), afford it an elevated place among the precious metals. Pugh also moves from gold to the golden ratio: it is something of an anchor in her practice; compositionally it provides a unifying factor among the disparate forms her works inhabit, and a focus for the different mediums she employs.

As an artist who is drawn to nature as a source of inspiration, Pugh has learned to look for patterns created by energy and to consider how we as humans - and other inhabitants of the natural world - effect change or adapt to the forces of nature. Pugh is fascinated by a phenomenon known as a ‘Kármán vortex street’. In fluid dynamics, vortex shedding causes a repeating pattern of swirling vortices. This often arises when winds are diverted around a blunt, high-profile area, such as an island rising from the ocean. The cloud formations are altered by the changing directions of the air swirling around. The von Kármán vortices are picked up by satellites orbiting the earth. It was these images that captured Pugh’s imagination. She responded by casting little rocks in plaster, gilding them and applying them to the surfaces of some of her works. They represent the islands, viewed from afar, that cause these strange, spiralling patterns. There is a tension created by these gilded objects sitting against the smooth grounds of Kozuke paper on panel. Pugh clearly enjoys this. To her the rocks are necessary to her creations, just as they are to the von Kármán vortices. They are part of an alchemical process - one where beauty, philosophy and science converge.

The entirety of Pugh’s practice circles around something alchemical. She borrows from science and the history of science but also from philosophical teachings and ancient lore. We cannot help but think of the myth of the philosopher’s stone when looking at Pugh’s golden rocks and those swirling shapes. The philosophers were not only in search of an alchemical substance that could transform base metals such as mercury into gold, they were trying to understand the mysteries of the universe and find enlightenment. Pugh herself is on a journey of discovery. So much of the process of her art making is an act of meditation, of revealing what is hidden or rarely noticed. Pugh is a conduit of energy and seeks to illuminate possibilities as well as spaces. There is a shamanic aspect to this, one where the artist has to attune herself to her subject and the world around her, even making herself invisible in order to allow that which lies beneath the surface to become apparent - if only for a brief, transient moment. The result is a series of beautiful but enigmatic works that we feel we already know. These forms are imprinted on our collective unconscious. They are universal shapes that though contemporary, also have their roots in our primeval past. Timeless, powerful and often deeply moving, Pugh’s works give us pause for thought and remind us not to lose sight of the majesty of the natural world and that we are in fact, its subject.